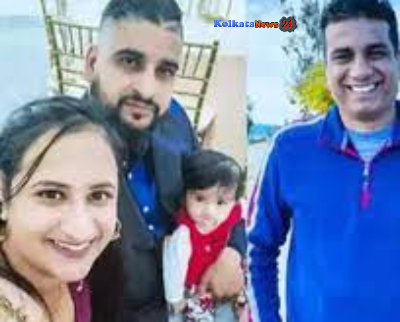 The four family members kidnapped from Merced County in California were found dead in California’s Central Valley on a Wednesday.

What happened to the four family members in California?

The Indian-origin family, including Jasleen Kaur and Jasdeep Singh, aged 27 and 36, and their eight-month-old daughter Aroohi Dheri and her uncle Amandeep Singh were kidnapped two days ago while they were on business on South Highway.

According to the surveillance footage, unidentified suspects armed with a gun abducted the victims from the family trucking business. The family reported them missing when a 2020 Dodge Ram truck belonging to Amandeep Singh was found on fire, but there were no signs of the owner.

According to the reports, the video shows that on Monday, Jasdeep and Amandeep arrive at their family truck business when the suspects wearing masks pull up with a gun and have their hands tied behind their back and then take Jasleen, who was carrying the baby.

“Our worst fears have been confirmed.” said the Merced County Sheriff when the family’s bodies were found two days after the kidnapping. The sheriff’s office was called around 5:30 Wednesday after someone witnessed their bodies on a rural farm area.

The Merced County Sheriff Warke stated that there are no words to describe the anger over this incident during the Wednesday night conference.

As for the investigation, the motive behind the kidnapping and the murder is unknown; however, they have arrested a 48-year-old man Jesus Manuel Salgoda who has been taken into custody as a suspect.

It was reported that Salgoda used the ATM card that belonged to the victim. Before the police could arrest him, he tried to kill himself.No charges have been filed against him; however, the officials are working on finding evidence against him.