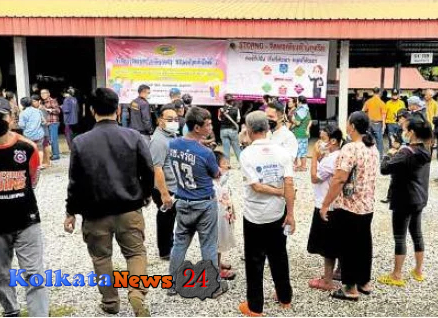 On October 6th, 2022, an ex-police officer killed at least 36 people, including 24 children, at a daycare center in northeast Thailand.

The attacker was Panya Kamrab, a 34-year-old ex-policeman who was dismissed from his post due to drug charges.

World’s worst children death toll in a massacre by a single person:

According to the reports, the ex-policeman went to collect his child from the daycare, and when he could not find his kids, he slashed and killed them. The children were aged between 2-5 years old.

According to the officials, the accused came into the daycare at lunchtime, shot 4 or 5 officials first, and then entered the locked room where the kids were sleeping and started slashing them. Among the massacres was a teacher who was eight-month pregnant.

Thailand massacre: Former police officer facing drug charge burst into a day care center in Thailand, killing dozens of preschoolers and teachers and then shooting others as he fled. At least 36 people were slain https://t.co/McDuIOsF4l pic.twitter.com/GlUnZx751l

One of the eyewitnesses, a teacher, suddenly heard a sound and saw two staff members collapse on the floor. Then he took another gun and a knife and stabbed the pregnant teacher. Then he started slashing the kids using a knife.

The assailant, after the massacre, kills his wife and his son before killing himself. The assailant is an ex-police officer who was dismissed due to failing the drug test.

As Thailand mourns the killing of three dozen people, 24 of them young children, in an attack at a day care center, relatives and friends of the victims gathered opposite the site of the massacre.https://t.co/PxJnnnsI27 pic.twitter.com/u4ITvexZu2

Day of mourning in Thailand:

The prime Minister of Thailand, Prayuth Chan – Ocha ordered all the government departments to fly the national flag at half mast on Friday to mark the horrifying tragedy. He also conveyed his sadness and condolences to the families of the victims. The victims’ families are gathered outside the daycare grieving over the loss of their loved ones. At least 24 children were killed in the massacre.